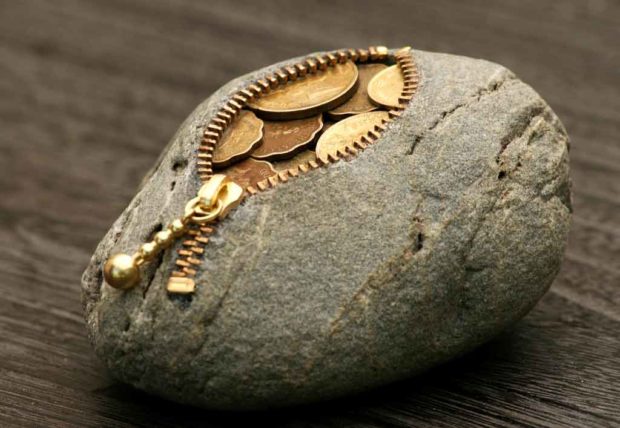 We live in difficult times for investors. Practically all major asset classes are richly valued in most developed markets. Yields are pathetic, or even negative. Underlying corporate profits aren’t growing as before. Central banks and corporate managements rely on financial smoke and mirrors to maintain the mirage that all is well. So what should investors do to survive and thrive? Where should you put your money?

It wasn’t always like this. In fact the past three and a half decades were a golden era for stock and bond investors. Understanding a little of the history helps us to work out what to do today.

That gilded age for investors was despite the big stock market falls of 2000-2002 and 2007-2009. If you wanted to make a tonne of money over the past generation all you had to do was buy equal amounts of US stocks and high quality US bonds. Say the S&P 500 index and 30 year US treasury bonds, in equal measure. Then you just had to wait.

Well, okay, that’s before inflation (3.3% a year), and taxes on the dividend income. Net you would have made something like 7% a year real return. You initial $10,000 investment would now be worth about $107,000, at constant prices. Then of course there would be capital gains tax to pay on the profits, if you chose to sell now.

The point is that stocks – and not just in the US – were a great way to grow your wealth over the past 35 years. The returns easily beat inflation, and wealth was compounded at a healthy rate.

Bonds, the other main asset financial asset class, were great investments too. The yield on 10 year US Treasury bonds peaked at 15.68% in September 1981. The 30 year bond yield peaked at 15.08% in the same month.

Not that many people were buying at that time. Bonds had been in a huge bear market since the early 1960s, with steadily rising yields (bond prices fall when yields rise, and vice versa). 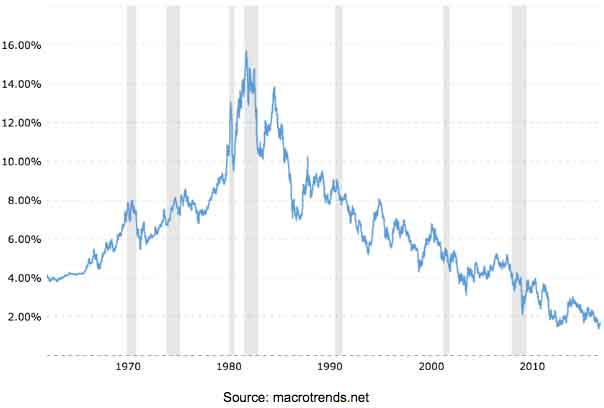 That’s the stuff that dreams are made of these days. US CPI was 1% in the year to September 2016. But a 10 year treasury yields just 1.59%, meaning the real yield is a mere 0.59%. In fact anything with a maturity less than five years gives a negative real yield.

Investors back in the early ‘80s had it easy – if they had the foresight. They could have just shoved half their money into long dated US government bonds and half into the S&P 500. Then done nothing for a generation.

Waited. Gone fishing. Sat on a beach. Whatever. Meanwhile, their money was quietly at work.

The bad news is that this isn’t repeatable for today’s investors. A large part of the profit from stocks came from multiple expansion as bond yields fell. Stock investors usually want a return above the yield on “risk free” government bonds, for the extra risk they take. As that required return falls, the valuation multiples rise – taking stock prices up with them.

As yields continued to slide, stock valuation multiples rose – with some bumps along the way of course. The P/E ratio of the S&P 500 was 7.4 at the start of 1980. It’s now 25. That multiple expansion added over 3% a year to the profits enjoyed by investors.

US stocks are now at their third highest valuation levels in history (for more see here). They’d need to fall by around 40-50% to restore levels of future investor profits to decent levels of 9-10% a year. As it is, stocks bought at current high prices are likely to make returns in the low single digits.

Both US stocks and bonds are expensive. And it’s a similar story in Europe.

Many government bonds even have negative yields, such as in Germany and Switzerland. As for European stocks the MSCI Europe index has a relatively high P/E of 21. That’s despite the companies having lower aggregate profitability (return on equity) than US corporations.

So what’s an investor to do? How is someone today supposed to protect their wealth, or to grow it for retirement?

In my view you should rule out bonds altogether. The only ones ever worth owning are the best quality ones, issued by developed country governments and rock solid corporations.

In normal times these act as a hedge against stock investments. When stocks crash, yields fall and bond prices rise. So there’s an offsetting effect, and you can then sell some bonds to buy stocks when they’re down, and cheap. This will improve returns over time.

But nowadays bonds are just risk without return. I’ll show you what I mean using something called a zero coupon bond, which is easy to value.

This is a bond which pays no coupon interest. You just buy it today at a price, and when it matures you get paid back a higher amount. The difference is your interest.

Of course different bonds work in different ways. The prices of shorter dated bonds, and ones that pay coupons along the way, are less sensitive to changes in yields. But I used this example to show you how, when yields are ultra low, bond prices become ultra sensitive to yield changes.

Another route is to buy short dated bonds. They have far less, but still some, price risk. But they come with a pathetic yield. Or you can buy longer dated bonds with modest yield but huge price risk. Why buy either? I wouldn’t.

So I rule out bonds. They are all risk and no return these days.

Also I rule out expensive stocks, like those in the US and most of Europe. Returns will be poor if valuations stay high. And they’ll be even worse in the medium term if valuations fall to reasonable levels, or even crash.

But we have to do something. Money has to be put somewhere. Just sitting on cash deposits, and nothing else, is a sure loser in the end. Tax on any income (assuming there is any interest) and inflation will have their wicked way, steadily but surely.

My suggestion is this, at the current time. Split your financial investments as follows:

There are pockets of value in stocks around the world. Emerging markets in general offer reasonable value. The MSCI Emerging Markets index has a P/E of 15.8.

Also I’ve previously highlighted the specific opportunities in Russia, Germany, China H-shares, Norway, South Korea, Colombia, and Japan (with a currency hedge on that last one).

Of course if US and European stocks crash then emerging markets and others will be dragged down too. Which is why it’s worth holding a large chunk of money in deposits, which I’ll call “cash” for simplicity.

(Note: you could also hold ultra short dated government bonds, such as US treasury bills, but there could be a trading cost, or custody fees charged by your broker.)

Cash loses value over time, after inflation. But it has no price volatility. So when (not if) there are stock market crashes around the world, or across the whole world at once, that’s when it comes into play.

It can be deployed quickly to pick up bargains as and when they arise. It’s “ammo” that can be fired off when there are juicy targets in the sights.

And with stocks so expensive in many markets, it’s also ballast that keeps your overall ship steady. The price of your stock positions could fall in the short run, but your overall portfolio will be insulated with a large allocation to cash.

And then there’s gold. I’ve written about this many times. There are both positive and negative reasons to own gold.

Over time, demand will continue to rise in places like China and India for this scarce raw material for jewellery and electronics. That’s what makes it the “ultimate consumer good”.

But it’s also insurance against a new financial crisis, since it’s no one’s liability – provided, of course, that you own physical metal.

It’s also an inflation hedge. If inflation ever does take off again, which could eat into the value of cash (at least if interest paid on deposits doesn’t enough at the same time), the gold price would rise and provide an offset.

Gold priced in US dollars has beaten US consumer price inflation by over 2% a year since 1976. Given the huge new wealth being created in gold hungry places like China and India, I see this continuing over the long run. In fact, given gold’s limited supply but massively swelling spending power, it could do even better in future years and decades.

So that’s it. Avoid overpriced bonds and stocks. Buy stocks where you can find reasonable prices. Keep some cash “ammo” (or “ballast”) aside for when opportunities come along. Add some gold, as an attractive investment in its own right, but also as inflation and crisis insurance.

Let me know what you think.