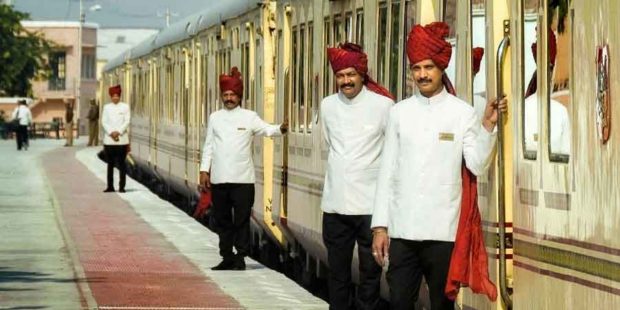 Last week I wrote a piece called “Introducing my system for choosing stocks”. It’s called the “GIV system”, and gives all potential investments a score from 0 to 10 across three factors: Growth, Income and Value.

To pass the GIV system screen, stocks must have a minimum combined score of 20. Very few achieve that. All stocks recommended in my new monthly investor report, which will be launched very soon, have to pass this rigorous test.

One of the things I mentioned last week was Indian stocks, meaning a country index such as the MSCI India. I wrote this:

“Growth prospects are pretty strong (medium to long term), scoring it a 7. But India scores only 3 for income, as Indian companies tend to pay low dividends.

India has relatively high interest rates (10 year government bonds yield 6.8%). Despite this, the MSCI India index has a P/E ratio of 22, meaning the earnings yield on stocks is only 4.5%, well below the 10 year bond yield.

What’s more, India is one of the most expensive emerging markets in the world. So I score India a big fat zero for valuation.

This prompted a reader to write in for more explanation. Here’s what he said:

In your most recent post, you gave India’s valuation a zero. I want to ask, what’s your basis for comparing bond yields to earnings yields? How do we factor in the fact that Indian companies have more growth opportunities in the future because of structural reform?

I’m surrounded by optimism and collective wisdom is telling me to stay invested. I agree with your logic, I’m just trying to understand when India would get a “10” on valuations, which is the score needed to reach your GIV total of 20.

Thanks, keep up the good work!

Thanks to Ashwin for his message.

To be clear, the GIV system is designed to identify stocks or stock indices that have a very high chance of making a substantial profit in future, once the three individual scores are combined. Getting past the combined hurdle of 20 is really difficult.

That’s not the same as saying that something scoring less than 20 is necessarily a “bad investment”, although some will be (especially those scoring less than 10). But the lower the score, the smaller the profit is likely to be, and the less chance there will be any profit at all.

India has a fast growing economy, and that’s likely to show up in above average profit growth. I’ve crunched some numbers for the MSCI India index, and company profits should grow about 9.6% a year, or thereabouts.

Growth of 9.6% sounds highly attractive, being twice the average growth rate of the US S&P 500 index’s earnings per share (EPS) since 1900. But there’s a catch. That growth rate is measured in Indian rupees, the local currency.

(Note: the currency code for the Indian rupee is “INR”. This is not to be confused with “IDR”, which is the Indonesian rupiah.)

Over time the rupee has been a relatively weak currency. Since March 1973 it’s lost 89% of its value versus the US dollar, which is down 4.9% a year (on average and with compounding). More recently, it’s lost a similar 5.3% a year over the past decade.

This chart shows the USD / INR exchange rate since March 1973, which is how many rupees can be bought with one US dollar. A rising line means a weaker rupee. 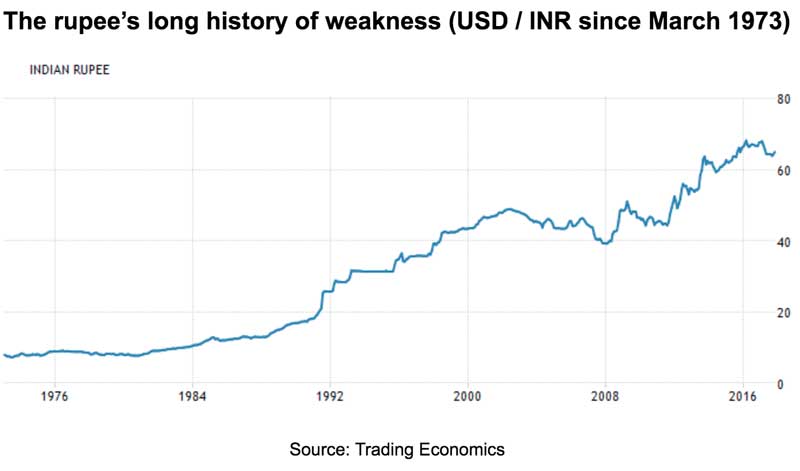 A weakening currency is the same as saying that the country tends to suffer high inflation rates. I have first hand experience of this, living as I do in Argentina.

Perhaps the currency outlook isn’t quite as bad in India it was in the past. But I’m pencilling in the rupee to fall by 4% a year against the US dollar in future, over the long run. It could be more or less, especially in the short run. But, given the history, that feels about right on average.

Put another way, at a constant P/E ratio and measured in US dollars, I’d expect the MSCI India index to rise by around 5.2% a year.

At the same time, the MSCI India dividend yield is a lowly 1.4%. Add that to the rupee growth estimate of 9.6%, and assuming no change to valuation multiples, and we’re up to 11% total return per year. But after the adjustment to growth for a falling rupee it’s down to just 6.6% a year in US dollar terms.

To be clear, that’s not completely tragic. But it’s also not that great. Incidentally, it’s also exactly the same as the total return on the MSCI India index over the past decade of 6.6% a year. (A coincidence, I promise, but one that gives me more confidence in my figures.)

Getting back to Ashwin’s questions, at what point would Indian stocks achieve a GIV score of 20?

Previously I gave Indian stocks a score of 7 for growth. But, now I’ve looked more closely, I’ll actually trim that to 6. That reflects the 5.2% a year expected US dollar growth rate, whereas I’d previously assumed 6%. “I” for income scores 3, because the dividend yield is a relatively low 1.4% a year.

Combined, that’s now a 9, which leaves Indian stocks 11 short of the 20 hurdle. Why did I give them a zero “V” score for valuation? And what have government bond yields got to do with anything?

Few people dispute that stocks are riskier than government bonds. Not least, individual companies can go bust, leaving stock investors with nothing. Whereas governments can raise taxes or print money to pay back their borrowings, or to cover interest payments.

Therefore it stands to reason that stock investors should make a higher return than government bond investors. They should demand an extra reward for the additional risk of owning stocks. In finance jargon that’s known as the “equity risk premium”, or “ERP” for short.

The required total return that stock investors should demand is known as the “cost of equity” in finance jargon. For a whole stock index, it’s the yield on local currency government bonds, known as the “risk-free rate”, plus the equity risk premium. (There’s a slight refinement for individual stocks.)

In other words, the cost of equity and expected return for Indian stocks are about the same. This means the index is trading at about fair value. It’s neither cheap, nor expensive, but about right.

Put another way, the MSCI India’s P/E ratio of 22 is pretty close to where it should be. In fact, crunching some more precise numbers, I reckon the P/E should be about 20, which means the market is about 10% too expensive.

How much cheaper for a GIV score of 20?

Remember, at a P/E of 20 the expected future return would be about 11% a year in rupees, and under 7% a year in US dollars.

This explains why I previously scored the MSCI India index zero for valuation upside. It’s slightly overpriced. So, what’s required for Indian stocks to get a GIV score of 20?

Put simply, they need to get a lot cheaper.

Company profit growth in the real world is not affected by stock price valuation in the market. This means that even if the Indian market gets a lot cheaper, the G score is unaffected and stays at 6.

That leaves 14 more points needed, split between income and valuation.

At the same time, at a P/E of 14.3 the dividend yield would increase by half to 2.2% a year. That yield increases because the index price falls as the P/E falls, but the absolute size of the cash dividends paid would be the same. A 2.2% dividend yield, instead of 1.4%, is enough to increase the income score from 3 to 5.

Putting these together , there’s now enough to achieve a combined GIV score of 20. That’s 6 for Growth, 5 for Income, and 9 for Valuation.

So there you have it. For Indian stocks to reach the 20 hurdle I set for my GIV system, the P/E ratio would have to fall from 22 to around 14. That means the index would have to be about a third cheaper.

There can still be individual Indian stocks that are attractive today. Even the index as a whole isn’t wildly expensive. It’s just fully priced, and probably slightly over priced.

Indian stocks as a whole are not a screaming buy. It’s probably best to wait for a better opportunity before piling in. It’s a reliably volatile market, so we may not have to wait long.