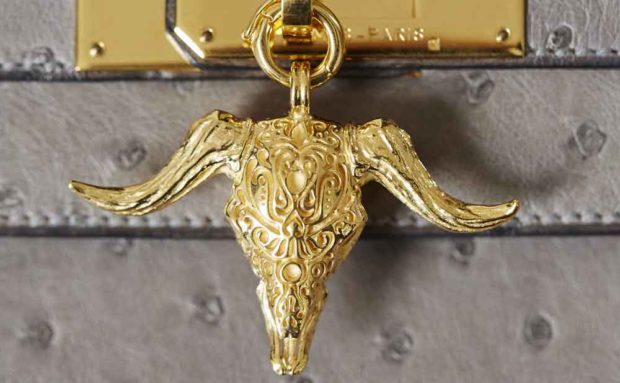 You wouldn’t know it from reading coverage of the markets, but gold has been doing rather well this year. That’s on top of last year’s solid gains. Of course it hasn’t kept up with the bubbles in speculative cryptocurrencies or overhyped tech. But gold’s almost matched the S&P 500 over the past year and a half. Why haven’t more people noticed?

That’s equivalent to a compound return of 12.3% a year (meaning with profits on profits). To put things into perspective, the ultra long term return on US stocks has been a little more than 9% a year, including dividends.

Since the beginning of 2016 gold has gained 18.3% and the S&P 500 is up 18.8%. In other words they’ve almost performed the same in the past year and a half (less two weeks). Of course you should add about 3% of dividends to the S&P 500’s performance, but that’s still a strong price performance for gold. 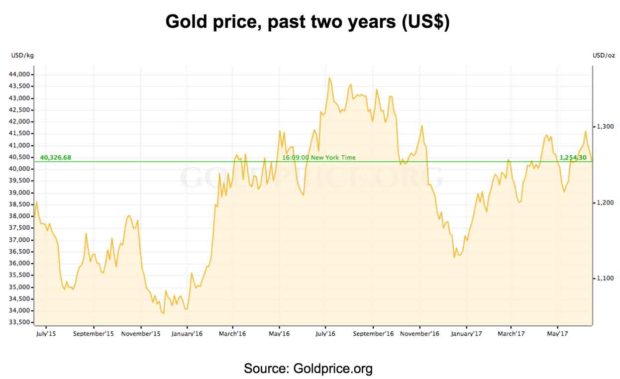 Long time readers of OfWealth know that I think gold has a great long term future. Most physical gold is bought in China and India these days, and most gold is turned into jewellery. Rapidly rising personal incomes and wealth in those huge countries ensure a rising trend for gold demand. On the other hand the gold stock only rises very slowly.

This means scarce gold is structurally well bid, which in turn should keep its price rising for many years (or decades) to come. To find out why gold should continue to be an inflation beating asset (note: not inflation matching) I recommend you read “The golden constant is dead. Long live gold”.

On top of that there’s a general scarcity of liquid, investable assets these days. Central banks bought so many securities in recent years, via the money printing programmes known as quantitative easing (QE), that the net supply of bonds and stocks for everyone else has shrunk. (See here for more about “The slowly disappearing securities markets.)

Here’s a chart of the size of combined central bank assets for the US Federal Reserve (Fed), European Central Bank (ECB), Swiss National Bank (SNB), Bank of England (BoE) and Bank of Japan (BoJ) since 2003. 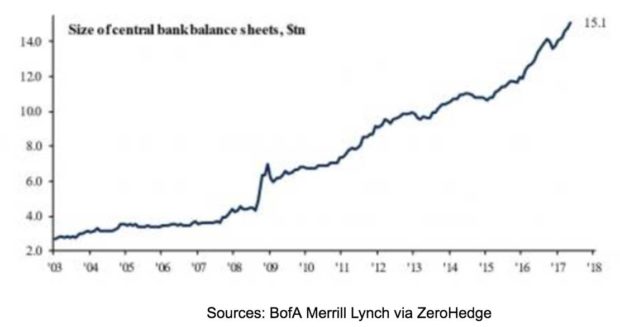 According to Michael Hartnett at Bank of America, these central banks added a staggering US$1.5 trillion of QE in just the first five months of 2017. This is communist style central planning on a vast scale…just applied to the capital markets instead of agricultural and industrial production quotas.

Most recently the ECB and BoJ have had their foot to the QE metal. The Fed is even talking about throwing the process (slowly) into reverse later this year, and starting to sell some of its huge hoard of bonds. But, for now, the overall trend for cumulative QE remains strongly upwards.

Since pools of investment funds are always growing – just think of your monthly pension contributions and such like – this has left more and more money trying to squeeze into a smaller and smaller home. Hence multiple bubbles, and perhaps some overflow into gold.

But it could also be gold’s other fundamental role that’s coming to the forefront. That’s as insurance against crisis. It’s not like there’s a shortage of big issues around. (Although most markets seem to be willingly ignoring them thus far.)

The political battle for control of the USA continues. There’s a daily dose of drama, played out in private in Washington and in public via the media (both mainstream or social varieties). And now an unhinged member of the public has shot a Republican congressman called Steve Scalise (and others) at a baseball field.

This is reminiscent of the murder of the British Labour Party’s member of parliament Joe Cox in June 2016. She was shot in the street just before the UK’s referendum on membership of the European Union.

Of course the UK has it’s own political power struggle going on. Prime minister Theresa May failed to win an outright majority in the recent general election. The most left wing Labour party in 40 years wants a new election. It’s a mess, just when the country needs a strong government to negotiate the Brexit deal.

And now a 1970s tower block has gone up in flames in London, killing at least 17 people and with fears the final toll could be over 100. It appears that the fire spread quickly due to flammable insulation recently fitted to the outside, and widely used in the UK and other countries. The search for blame has dialled up the political temperature even further.

There’s too much politics going on these days. Too many people have got their blood up. It’s never a pleasant thing, and rarely ends well. I’ve seen it in Argentina where I live, under the previous government. Now I’m seeing it in my country of birth, the UK, and between my many American friends.

Russia is being used as the scapegoat in the Orwellian US power struggle. The latest twist is that the senate has overwhelmingly voted to extend economic sanctions against Russia. This is to prevent a new natural gas pipeline called “Nordstream” from being built between Russia and Northern Europe (thus bypassing unstable Ukraine).

European companies that take part in the project would be sanctioned. The real aim is probably that the US wants to export more liquid natural gas (LNG) to Europe. Getting rid of Nordstream reduces competition. The current US hysteria about Russia provides political and media cover.

This has prompted a furious response from the US’s increasingly impatient European “allies”. For a start, there was an unusual and strongly worded joint statement from the German foreign minister, Sigmar Gabriel, and the Austrian chancellor, Christian Kern. Check out these excerpts:

“Europe’s energy supply is a matter for Europe, and not for the United States of America.”

“We can’t accept the threat of illegal and extra territorial sanctions against European companies.”

Calling proposed US actions “illegal” and “very negative” isn’t exactly diplomatic language. Put another way, the new media McCarthyism now involves the US shooting itself in the foot by alienating its main friends and allies. Will we see retaliatory EU sanctions against US companies? Anything seems possible these days.

In this kind of climate…and don’t forget the problems in Syria/Iraq, Venezuela, Brazil and North Korea (although the South Korean stock market is paying no attention – it’s up 27% year-to-date!)…perhaps it’s no surprise that gold has been pretty strong. But it’s done so largely unnoticed by the mainstream.

In fact, maybe the real surprise is that gold isn’t rocketing skywards at a faster rate. That would make more sense than the absurd valuations of, say, Amazon Inc. (NASDAQ:AMZN), a not-for-profit logistics company, or Tesla Inc. (NASDAQ:TSLA), a supplier of niche transportation devices (by which I mean, overnight charging isn’t an option in most of the world’s cities)…to name just two.

As it stands, I have no idea where gold’s price will go in the short term, nor am I about to guess. But I still think everyone should own some gold, both for its short term insurance value and its long term consumer demand in vast and fast growing places like China and India. I recommend 10-20% of your portfolio.

If you’re doing it via your brokerage account then the SPDR Gold Shares ETF (NYSE:GLD) is the biggest ETF and pretty much as good as any other. But it’s best to own physical gold as your direct and personal property.

So far the best way I’ve found to buy and store physical gold is to own allocated bullion using BullionVault, which has vaults in multiple countries. “Allocated” just means it’s your direct property. The company has low charges and price spreads, excellent transparency in all aspects (which is often lacking at competitors), and thorough security protocols.

The other alternative is to own bullion coins (Krugerrands, Eagles, Maple Leafs, Pandas etc). But that will cost more money when buying and selling, is probably less secure (coins can be stolen or lost), and isn’t suitable for large amounts of investment.

Even if you aren’t interested in owning gold, you should be aware that it’s had a pretty good run in the past 18 months. Yet few people seem to have noticed.

Everyone’s been too busy talking up stocks, trying to second guess the central banks, or even speculating on Bitcoin. But while they’ve been ignoring it, gold has been enjoying a stealth bull market, right under their noses.