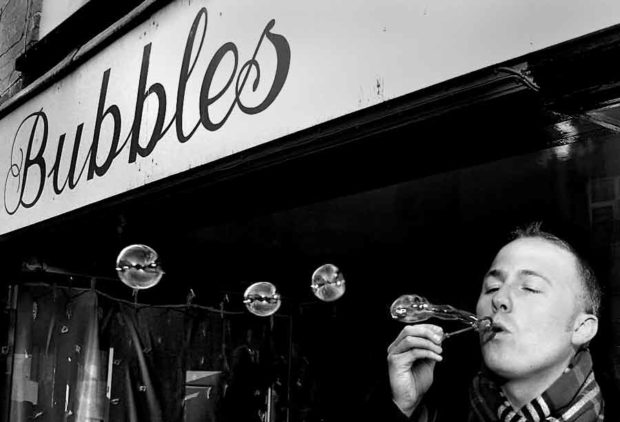 Almost 10 years ago, in May 2008, I sold my apartment in London before emigrating to Argentina. That was at the top of the housing market, just before the brewing global financial crisis reached its peak. A decade later, London’s in the late stages of another housing bubble, goosed up by ultra low interest rates. But it’s certainly not alone. As rates begin to rise so do the risks of these bubbles, and to stocks of exposed banks.

When I sold my place a decade ago, the real estate agent told me I was “the last one out of the traps”. The global financial crisis was still gathering a full head of steam, and property transaction volumes in London collapsed during the summer of 2008.

It was a weird situation I found myself in during early 2008. Some time around February or March, I remember telling a serious colleague from Zurich that I was quitting banking and emigrating to Argentina. He merely said, in his usual, understated way: “That’s brave.”

As it happens, I finally landed in Argentina on 1st October 2008, ready for a new life. That was two weeks after Lehman Brothers, a US investment bank, had been thrown to the wolves (everyone else was bailed out). Argentina, with its long history of economic and financial crises, suddenly looked like a relative safe haven, probably for the first time ever.

What happened around the world in the following 10 years was unprecedented. Facing the economic abyss, central banks slashed interest rates as close to zero as they dared, and printed trillions of dollars of money to buy bonds, and suppress yields.

They had their reasons, although it’s still debatable whether they achieved desirable outcomes. But one effect was to ignite a fire under many of the world’s house prices.

Sure, some bubbles burst, such as those in Ireland, Spain and Greece. The bizarre EU logic of preserving the euro, at any cost, ensured economic depressions in those countries. Greece’s GDP is still a quarter smaller than it was before the crisis.

But other places saw house prices climb like hell, as cheap new money sloshed around the world’s financial system. With rates now on the rise, it’s time to ask whether the bubbles are about to burst.

Every year, Swiss bank UBS (incidentally, my pre-emigration employer) produces a report called the Global Real Estate Bubble Index. The last one came out in September 2017.

The report looks at house prices in 20 top cities around the world, many of them financial centres. There are five in the US, two in each of Canada, Germany, and Switzerland, and one in each of France, Hong Kong, Italy, Japan, the Netherlands, Sweden and the UK.

An assessment is made of residential real estate prices in each city. This is based on a weighted average of five measures:

UBS works out a score for each city. Then it puts the cities into five potential categories: 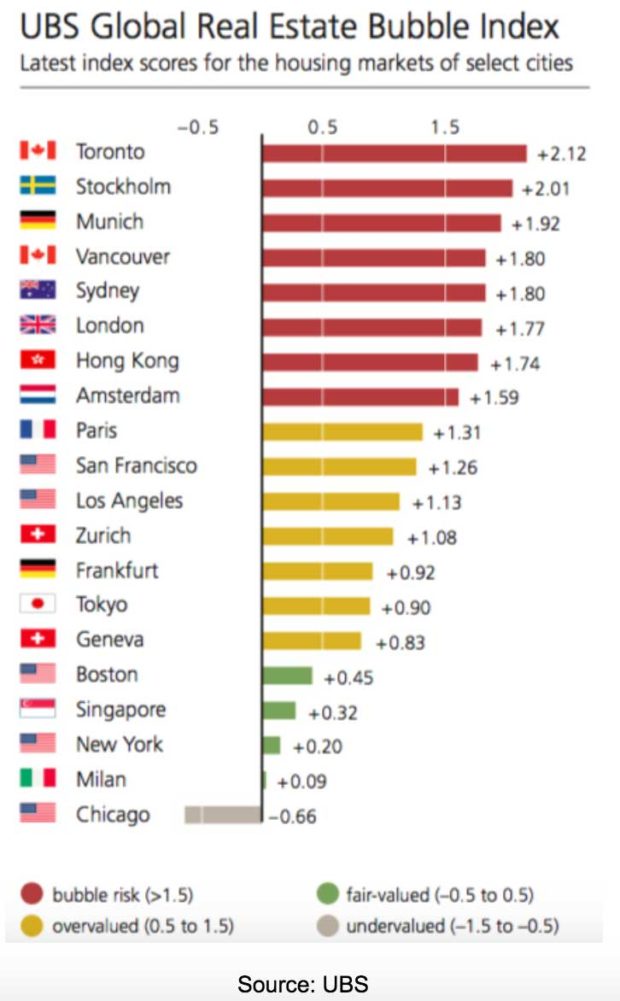 Eight of those 20 cities are in the “bubble risk” category.

According to the scores, Toronto in Canada tops the list of most overpriced houses, with Vancouver in fourth place. Other overpriced places, in red, include Stockholm, Munich, Sydney, Hong Kong and Amsterdam.

None of the five US cities is reckoned to be overpriced, although there are bound to be pockets of rich pricing around the country. Chicago brings up the rear of the full list, and is reckoned to be on the cheap side. Milan in Italy is second cheapest.

What’s notable is that bubbly house prices aren’t isolated to one particular part of the world. You can see from the red spots on the following map, this phenomenon is global.

There’s always going to be more than one factor driving house prices. Government policies, the general economy, rates of population growth relative to the pace of construction, availability of development land, and so on.

But one thing is consistent across all the “overpriced” cities. They’re all in countries with negative real (inflation-adjusted) interest rates.

For each country, I looked at yields on short-dated, three month government bonds. Then I deducted the rate of consumer price inflation (CPI) for the past 12 months.

Yields matter, since mortgage rates are usually priced with reference to them. CPI matters, since wage growth will usually vary depending on the pace of price growth, and wage levels determine ability to pay rents and mortgages. Hence real yields should matter for house prices.

The result of my calculations is an imperfect measure of real yields, using backward looking CPI but (short-term) forward looking yields. However, I think it’s a reasonable way to highlight whether interest rates are currently insanely low, relative to inflation, or merely absurdly low.

In fact, in this sample, only Singapore has a normal looking, positive real yield using this method, of 1.5%. Every single other country has negative yields, with the most extreme being Germany’s at -2.4% and the UK’s at -2.3%. (Which is nuts.)

Next, I compared these real yields with UBS’s scores for the cities in each country, using an average city score for those countries with more than one city in the sample. The results are shown in the next chart: 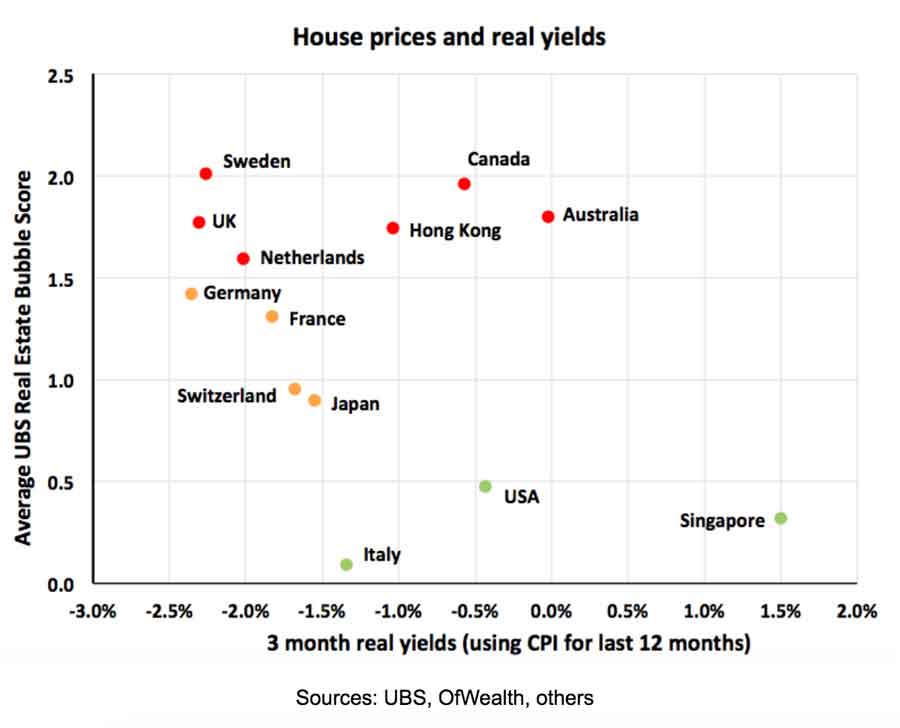 I’d say there’s a general, loose correlation here between real yields and prices. Broadly speaking, ultra-low yields mean houses are more likely to be overpriced, and vice versa. But there are outliers too, that break the pattern.

Italy has deeply negative rates, but Milan is inexpensive, according to UBS. However, Italy also has a weak economy, huge debts, poor demographics, and is even struggling to decide who won Sunday’s general election (both anti-establishment parties, the League and the Five Star Movement, claim they should lead the government).

There’s another way to look at this situation: long run price rises, adjusted for inflation. The next chart is from the Economist, and shows most of the bubblier countries (there wasn’t data for all of them). I’ve also included the USA for reference. 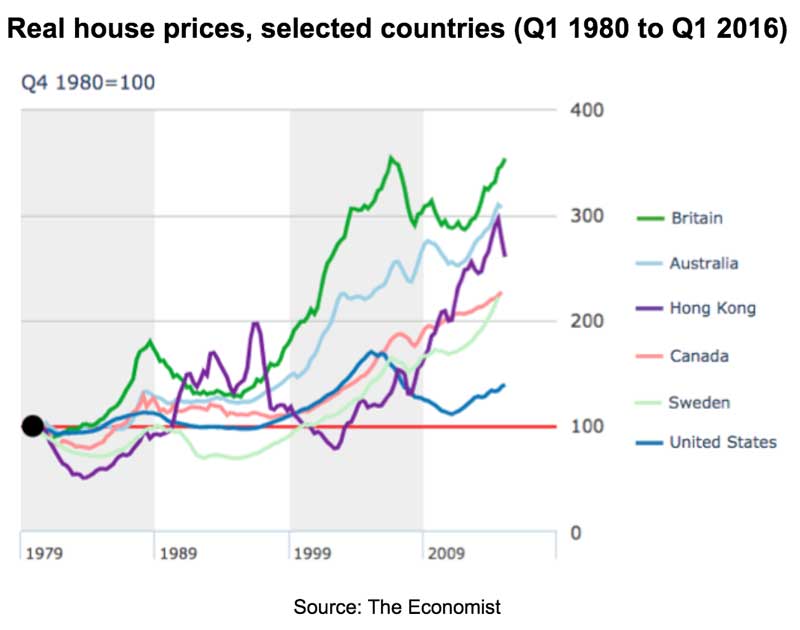 The lines start in first quarter 1980, but only run until first quarter 2016. However, the point is the long term trend. It’s clear that houses in (at least) Britain, Australia and Hong Kong are insanely expensive in real terms. Canada and Sweden are also at new peaks.

Hong Kong, in particular, has some unique issues which may come back to bite it.

The Hong Kong dollar has been pegged to the US dollar since the early 1980s. Over the past decade, this has led to absurdly low interest rates at the same time as the Chinese economy has boomed. Money has been sloshing over the border from mainland China. (Macau may be stuffed with casinos, but Hong Kong has its properties.)

Never has a territory had such inappropriate monetary policy in the face of such a massive, persistent and rapid economic boom. It’s no wonder that houses there are in a bubble!

I may come back to look at Hong Kong in closer detail another day (after all, I lived there between 2002 and 2005). There are some unique risks there for investors, which could be coming to a head.

In the meantime, I urge caution to anyone investing in stocks of banks with heavy exposure to the world’s property bubbles. That includes any with substantial mortgage lending in the big cities of Canada, Sweden, Australia, the UK and Hong Kong.

Banks, in general, are in far better financial shape than they were a decade ago. They have much bigger capital cushions and huge liquidity reserves. But that doesn’t make them immune to sudden earnings hits and stock price falls. Bursting property bubbles, when they happen, hit banks hard.

With rates starting to rise around the world, artificially inflated property prices may be running out of excuses to remain bubbly. Invest accordingly.