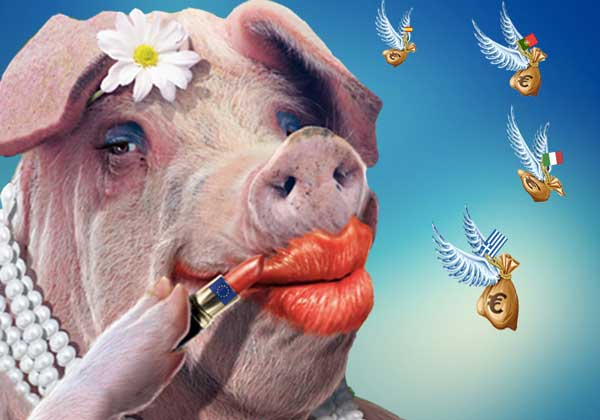 Greece may be hogging the headlines at the moment. But it’s worth remembering that it’s just one letter in a porcine acronym of struggling Mediterranean countries. These are the so-called “PIGS”, namely Portugal, Italy, Greece and Spain. Between them, they account for a large part of the economic and financial malaise that cloaks Europe.

“Never buy a pig in a poke” goes an old English saying. About 30 years ago my Dad explained to me that “poke” was an old word for a sack. So the idea is to not buy something that you haven’t examined first hand.

As the farmer or butcher would have inspected animals at the market before purchasing them, so we should take a close look at all investments before piling in. Just because something appears cheap on the face of it doesn’t necessarily mean it’s a bargain.

Greece continues to edge closer to either a debt default or stretching another temporary patch over its problems. The New York Times reported this week that the Syriza party, the socialists that are currently in power, had come close to voting to default on the country’s debt to the IMF.

Apparently the vote was 95 to 75, which is a gap of 20 votes. Put another way, if just 11 more people had voted to default – taking the numbers to 84 against default to 86 in favour, then default could have become government policy.

Irrespective of that, analysts at Deutsche Bank (company motto: “a passion to perform”, which sounds more appropriate to classical musicians than bankers) now estimate the probability of a Greek debt default at 70%.

The PIGS may finally be realising that it’s time to save their own bacon instead of fattening up foreign banks and industrialists.

It’s finally dawning on the mainstream financial community that things are changing in Europe. Some people are no longer happy to be bossed around by the EU bureaucrats in Brussels, or the banks that lobby them. The PIGS may finally be realising that it’s time to save their own bacon instead of fattening up foreign banks and industrialists.

Whatever the outcome of the latest Greek drama, we continue to recommend you avoid investing there. What happens will be determined by the vagaries of politics at a time when political emotions are running high both in Brussels and in Athens.

All that makes the outcome too hard to call. Anyone that tries is doing no more than guessing wildly. From an investment perspective we’d rather sit it out for now, and just see what happens in the coming weeks and months.

But….IF Greece defaults and leaves the euro it will reap the dual benefits of a much lower debt burden and a more competitive (cheaper) currency. The risk for the empire builders at the heart of the EU is that it won’t take long for other countries to spot this and wonder if they should do the same.

So the question becomes this: should we take the same wait and see approach to investments in Portugal, Italy and Spain? After all, each of those countries has significant problems of its own, even if they aren’t currently under the media or market spotlights in the same way as Greece. Our conclusion? Yes, we should stay away.

To be fair, in financial terms none of these places is quite as far gone as Greece. But just because someone isn’t collapsed in a heap on the floor doesn’t mean they aren’t drunk.

Despite this – and due to the weird, centrally planned world of money printing and market rigging that exists in virtually all developed countries – these governments can still borrow extremely cheaply. The yield on 10 year government bonds, all issued in euros, are 2.5% for Portugal, 1.9% for Italy and 1.8% for Spain.

By comparison Greece has to pay 10.7% a year to borrow for 10 years. Although that seems to me to be on the low side in such a precarious, near-default situation.

Also all countries ran meaningful budget deficits in 2014, which is when the government is spending more than it receives in taxes. These were 3% for Italy, 3.4% for Greece, 4.8% for Portugal and 5.6% in the case of Spain.

Needless to say, GDP growth is anaemic as well, meaning the debt burdens continue to grow in relation to the economies. In fact GDP  growth is so low in all countries that it’s practically a rounding error. Or perhaps just the product of an inventive government statistician with a sharp pencil.

To make things even worse, all four countries have fast ageing populations. Each year there are more old people – and the associated costs of paying for their state pensions and healthcare – and fewer people of working age to pay taxes. Portugal has the worst trend, closely followed by Italy, then Greece and Spain.

Perhaps most importantly, in the shorter term at least, is that unemployment rates range between high and extremely high in all four countries.

Greece’s unemployment rate is the highest at 26%, but Spain is not far behind at 23%. Those are both consistent with deep depression conditions. Portugal and Italy are better, at 14% and 13%, but those are still high levels.

Even worse are youth unemployment rates, which relate to those aged 15 to 24 years old. Spain’s rate is an insane 54%, even pushing Greece’s 50% into second place. Italy is not far behind at 44% and Portugal has a slightly better but still bad 35% of youth with no jobs.

It’s easy to talk in abstract ways about economies and the statistics that are used to measure them. But underneath it all we’re really talking about people’s lives.

These high unemployment rates – and especially the youth unemployment rates – have major implications. It’s easy to talk in abstract ways about economies and the statistics that are used to measure them. But underneath it all we’re really talking about people’s lives. Their hopes, dreams, achievement and disappointments.

When people are bored and poor due to lack of job opportunities then that’s fertile ground for social unrest and major political change to take root. It’s easy for a populist politician to rouse a rabble when a lot of people feel like they’re getting a bad deal.

Populism tends to take on one or a combination of two flavours. There’s socialist (or even communist) populism, which can be characterised as “Vote for us and we’ll give you the Moon, even though we can’t afford to get there”. Then there’s nationalist populism, which is “Vote for us and we won’t let anyone else get their hands on your piece of Earth, even though we’ll mess it up in the process.”

The rise of populism is exactly what we’ve already seen in Greece. The Syriza party is a hard left socialist outfit who has promised to stand up to external creditors and reverse austerity initiatives (spend even more). This has led to the current debt stand off.

Similar populist movements are building in other countries as well. There are substantial levels of support for just about anyone who can promise any kind of change. Eventually voters in all countries will choose more confrontational governments. Instead of “Grexit” the language-mangling pundits will be talking about “Pexit”, “Spexit” and “Itexit” (yuck).

The overarching point is that all the PIGS are deep in the…ahem…doldrums, and without much with which to paddle. The problems are financial, economic, demographic, social and political in nature. And they’re not going away soon, if ever.

All of this bad news shows up in property prices as well. Here’s a chart from The Economist that shows house prices in Spain (dark purple), Greece (pale purple) and Italy (yellow) between first quarter 1997 and first quarter 2015 (no data for Portugal, but I bet it’s a similar picture). 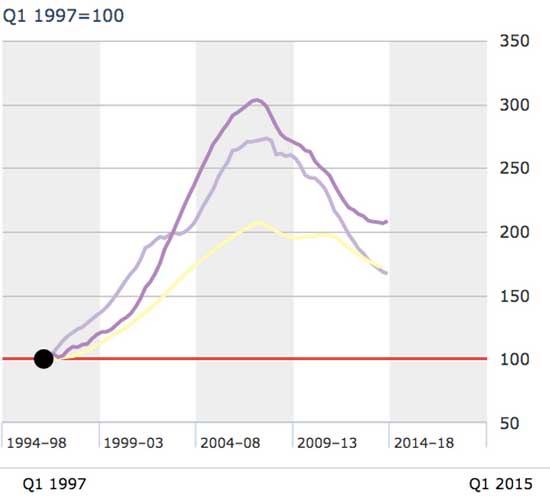 It looks like Greece and Italy continue to slide from their 2007 highs, although Spanish property prices may have found a bottom – at least for now. Either way, the very weak property markets in these countries are a clear sign of economic malaise.

So what does the future hold? Might the PIGS fly? Unlikely. However much lipstick or other makeup is applied, there will be no hiding the piggy nature of the economic beasts in question.

Instead we should expect more financial patches to be applied to the gaping wounds. Expect periodic market panics. Expect increasingly radical politics. And expect it all to drag on for many, many years.

Investors in any of these countries will need to be highly selective and unusually cautious for a long time to come. If not, for the most part they will be casting their pearls before swine.